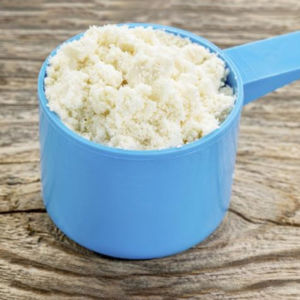 Diabetes Mellitus is a disease identified by the body’s impaired ability to produce (or respond to) the pancreatic hormone insulin, which results in abnormal carbohydrate metabolism elevating sugar levels in the blood and urine. Greater than 90% of all cases of diabetes is classified as Type II (T2D) which will be the primary focus of this white paper.

Currently, 9.4% of the U.S. population, or 30.3 million people have T2D1. Some characterizations of T2D patients and risk factors leading to the diagnosis include:

There are many pharmacotherapy treatments that help manage T2D including oral medications and insulin. However, the last 15 years of clinical research has also shown promising dietary strategies as adjunct therapies when managing diabetes, most notably therapies aiming to manage postprandial glycemia, or after meal blood sugar levels.

One particular nutrient, whey, once viewed as a waste product, has garnered particular interest as demonstrated by its ability to diminish postprandial glycemia through many interrelated pathways. For every nine pounds of cheese that is produced there is about 9 pounds of liquid whey. This liquid contains approximately 0.8% protein by weight, and it’s been rapidly gaining recognition as a critical functional food2-3. With respect to T2D, there is tremendous clinical evidence that demonstrates that: 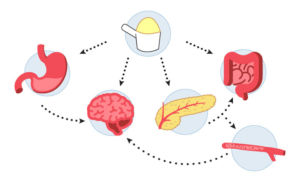 Due to the current cost of T2D, whey protein can be used as an adjunct dietary therapy in the managements of type 2 diabetes.

There are currently three main forms of whey protein available: whey protein concentrate (WPC), whey protein isolate (WPI) and whey protein hydrolysate (WPH). WPC is defined as containing 35% – 89% protein with fat, lactose and minerals comprising the balance. WPI is defined as containing at least 90% protein with very low levels of both fat and lactose. WPH can be either a concentrate or isolate (depending on level of protein), but contain a percentage of the whole proteins that’s been hydrolyzed by proteolytic enzymes3-6. In the presented studies, WPC and WPI were the primary forms of whey unless mentioned otherwise.

There is clear clinical evidence that whey has an insulinotropic effect, meaning that it stimulates the release of insulin following food intake. However, it is less clear as to whether this effect is meaningful when evaluating postprandial glycemia in patients with T2D, often whom are severely insulin resistant and present with hyperinsulinaemia7-10. Data presented by Frid et al looked at the effects of adding whey protein into both high glycemic meals (breakfast and lunch) in patients with T2D. Plasma insulin levels were higher after both meals, especially when compared to controls that included lean ham protein or lactose11. In other studies evaluating dietary interventions for T2D there have been reports of up to 4 fold increase in insulin response to meals that contain both protein and carbohydrates, when compared to carbohydrates alone12-13. Lastly, in a study of male subjects (Nuttall et al) with diet controlled T2D, demonstrated that when adding protein to a mixed meal that glucose response as measured by blood glucose response (AUC) was 1/3 lower than no protein14-16.

The term “preload” refers to small doses of a given macronutrient at a specified time before a main meal. The concept here is that a “preload” would be administered at some specified time before the actual meal in an attempt to encourage the small intestine to release the hormones glucagon like peptide 1 (GLP-1), gastroinhibitory peptide (GIP), cholecystokinin (CCK) and peptide YY (PYY) – all of which play roles in delaying gastric emptying and stimulating the release of insulin. In general, whey protein has been given as preloads (in healthy non T2D subjects) and shown to delay gastric emptying. In one study by Akhavan et al, blood measurements of oral paracetamol absorption (a common analgesic) were delayed, along with elevated postprandial GLP-1 levels17.  In another instance where whey protein was given just prior to a meal, blood glucose measurements via AUC was decreased by over one third with accompanying elevated insulin and GLP-1 levels18.

When looking at specifically those patients with T2D, it’s well established that whey protein stimulates incretin hormones. Researchers Ma et al reported that in patients with T2D a preload given 30 minutes before a meal slowed gastric emptying. In this particular study gastric emptying was quantified by the accepted gold standard method scintigraphy, where radioactive tracers are used to track internal movement. Whey protein significantly reduced what’s known as postprandial glucose excursion, as well as stimulated hormones insulin, CCK, GIP and GLP-1. These findings have been confirmed in other studies as well19-20.

It’s well studied that manipulating dietary macronutrient composition plays a significant role in energy expenditure and appetite reduction21. Also, it’s been demonstrated that protein has a more satiating effect than either dietary carbohydrates or fat22-26. Looking at the effects of whey protein specifically it has been shown to not only enhance satiety, but also reduce caloric intakes at subsequent meals. This effect is attributed to whey’s effect on appetite and regulatory hormones. More specifically, it’s purported that whey stimulates the secretion of PPY, GLP-1 and CCK by suppressing a different appetite hormone, ghrelin, one of our body’s orexigenic hormones. In one particular study by Bowen et al the intake of whey protein had actually suppressed ghrelin and elevation of both GLP-1 and CCK. This effect was associated with a reduction in energy intake for ad libitum meals. In one last study where an indexed hunger score was evaluated looking at the effects of whey versus casein, both GLP-1 and CCK levels were significantly higher following whey, contributing to a greater satiating effect. There is also other evidence that reports higher PPY after whey protein intake (compared to other proteins), that demonstrate comparable ghrelin and CCK responses27-31.

A main outcome in the successful management of T2D is the measurement of glycated hemoglobin, or HbA1c; this is the body’s long-term response to carbohydrate metabolism. While it’s well known that higher protein diets positively affect weight loss (i.e. lose weight) and preserve lean body mass, there is still question as to long term HbA1c outcomes in patients with T2D. In a five week study conducted by Gannon et al, men with T2D were given diets with either 15% or 30% energy from protein. The group at 30% protein had a more significant reduction in HbA1c. Another area of concern in the long-term use of whey protein for the adjunct management of T2D are effects on both bone and renal health. One recent two year-long study of postmenopausal women found no difference in bone densities for those in the high protein diet; in a separate study that evaluated patients with T2D and microalbuminuria, there was no negative effects on renal function in the one-year weight loss trial32-35.

There’s a massive body of peer-reviewed evidence that’s accumulated over the years that shows the promising effect of whey protein to be used as an adjunct therapy in the management of TD2. Patients that add whey protein to their dietary intake (and subsequently reduce other nutrients like carbs) experience benefits in three main ways: 1) reduced postprandial glycemia, 2) delayed gastric emptying and 3) appetite regulation via increntin hormone stimulation. When it comes to supporting patients with T2D the clinical evidence is clear that including whey protein in meals and supplements that: